What Can I Substitute for Evaporated Milk + A Recipe

Grocery shopping is already done for the week, but you just realized you forgot to pick up evaporated milk. Dang it! Don't worry, we're here to save the day. Making a substitute for evaporated milk is a piece of cake! Even better? Ours is keto-friendly and dairy-free!

It doesn't matter how many times you double-check your grocery list. There's always at least one thing you forget to pick up! Hey, it happens to us, too! But here's the thing. You don't have to run out to the store every time you're missing an ingredient!

From our experience, there's a substitution for just about anything. So, the next time you find yourself wondering what to substitute for evaporated milk, remember this post. You'll be prepared!

Let's start by tackling an all-important question. Is there a difference between evaporated and condensed milk? If so, what is it?

The short answer is: YES! There is quite a big difference. We can understand the confusion, though. Those dang cans and labels look so similar! Here's what you should know:

Both are concentrated versions of milk, but they serve pretty different purposes. That's why you should be careful not to use the two interchangeably. This leads us to the whole point of the post: what you can substitute for evaporated milk.

WHAT TO SUBSTITUTE FOR EVAPORATED MILK

If you don't have a can of evaporated milk in the pantry, you've got a few options! Here are some easy peasy substitutes to try:

See? Super easy, right? Now, what to do with that condensed milk? We've got storage tips and yummy ideas for ya!

WAYS TO STORE & USE THE LEFTOVERS

Whether you end up with half a can of unused evaporated milk or a little bit of homemade stuff leftover, here's what you need to know. Just move your leftovers to an airtight container and store in the refrigerator for up to five days. You can also use your evaporated milk in one of these yummy dishes:

There are plenty of savory recipes that call for evaporated milk, too! Creamy soups are the perfect candidate. Try using evaporated milk instead of half and half to make your favorite recipes (like this broccoli cheddar soup) a little healthier.

Now, if you want to make your own batch of evaporated milk, we say go for it! We've got an easy recipe to share. And bonus… it's dairy-free.

MAKE YOUR OWN DAIRY-FREE EVAPORATED MILK

If you have kiddos or family members who are sensitive to dairy, you know the struggle is real when it comes to baking treats the whole family can enjoy. We use a ton of almond milk around here, and now we're going to show you how to turn that sugar-free, dairy-free almond milk into an evaporated milk substitute! 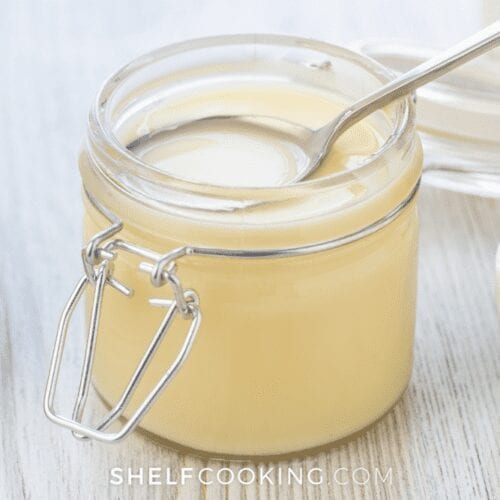 This evaporated milk substitute is perfect for baked goods! If you're looking for a dairy-free substitute to use in savory dishes, try soy milk instead. Follow the same instructions outlined here.

Super simple and super delicious! It goes perfect in any recipe.

How do you use up leftover evaporated milk? Leave a comment and let us know!

Looking for other recipe substitutes?

Now, bake it away!

The Best Slaw Recipe for Tacos, Sandwiches, and More!