You've got a big bag of apples you need to use. What's a gal to do?! Here's an idea: make some slow cooker apple crisp. This recipe is just begging for a scoop of vanilla ice cream—yum!

The only thing better than cooking with the crockpot is making desserts in that bad boy. We admit it. We've got a serious sweet tooth. But hours and hours of free time to devote to baking? Not so much.

Luckily, this slow cooker apple crisp recipe takes just minutes to prep, and then it cooks itself. Your kitchen will quickly smell like a fall festival, and we guarantee your hubs and kids will come running! The hardest part about this recipe is trying to keep everyone from sneaking a bite before it's ready. Don't say we didn't warn you!

We love this recipe as-is, but we also get that not everyone has the same items on hand in their fridge or pantry. Sometimes you NEED a good home-cooked dessert, and we don't want to let a missing ingredient or two stop you from making this one! Try one of these substitutions:

See? SO easy to make some simple modifications. You could even turn this into an apple AND pear crisp. Why not?!

HOW TO STORE LEFTOVERS

Wait. You have leftovers?! LUCKY! Here's what to do with any apple crisp your family doesn't devour:

While we're on the topic of leftovers, we've got one last (fun) order of business! You know we're always looking for ways to make leftovers feel brand new, so let's do it!

This crisp is absolutely delicious on its own or with a scoop of ice cream, but if you like to experiment as much as we do, then we know you'll love one of these ideas for using any leftovers:

We'll take one of each, please! Okay, maybe two. 🙂

Okay, are you ready to make this bomb recipe? It's so yummy, you're gonna feel like a slow cooker ninja after that first bite. We know your family will be impressed, and we won't tell them how simple this is to throw together. It's our secret! 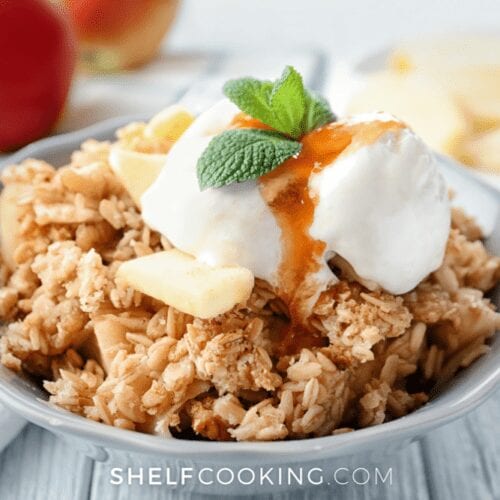 Serve with a scoop of vanilla ice cream or top with whipped cream and enjoy!

We love to serve our apple crisp alongside a big scoop of vanilla ice cream! Have you tried this creamy, dreamy homemade ice cream recipe? You won't be disappointed! You might like this whipped cream, too.

What's your favorite dessert to make in the slow cooker? We want to hear all about it! Drop us a comment below.

15 Best Ever Instant Pot Soup Recipes To Try This Fall

How to Make Freezer Jam Your Fam Will LOVE

This Tasty Frozen Fruit Salad Will Be Your Favorite Summer Side Dish!