It's a time of year that many people look forward to — eggnog time! So, what can you do with that eggnog after the party is over? We've got you! Use our recipe and your leftovers to throw together some eggnog French toast. It's SOOOO yummy!

Love eggnog (do we even need to ask)? So what can you do with all of that extra eggnog when you're over having to drink it? What about all of that bread you didn't use for Thanksgiving stuffing? We've all been there, right? You're putting all your creative juices into figuring out how to combine that mish-mash of ingredients on-hand into something edible.

This delicious recipe was born out of just such a moment. Imagine gathering the ingredients to make French toast for your family. You've got the ingredients… and even if you don't have an egg in your house, you're still a-okay! That's because a half-used carton of eggnog was in the fridge ready to be used in a pinch. Voila! An easy-peasy new take on a delicious breakfast dish.

THE BEST BREAD FOR FRENCH TOAST

If you've got leftover bread sitting around and wonder which one will work best for your French toast, here are the best options:

Let's be honest. We've never met a slice of French toast that we wouldn't eat and didn't like. Use these options for bread if you have them on hand, but really any bread will do.

HOW TO FREEZE FRENCH TOAST

The epitome of shelf cooking is making extra and freezing it properly for another time! To keep some for later, flash freeze the slices of cooked French toast on a cookie sheet in a single layer. Then bag the French toast in a freezer bag, label the bag, and add the date.

HOW TO USE LEFTOVER EGGNOG FRENCH TOAST

If you have leftovers after breakfast and don't want to let them go to waste, then try out one of these UH-MAZING options with those French toast slices. You won't regret it.

You're really doing your shelf cooking community proud by using the leftover eggnog for your toast and THEN using your leftover toast for another recipe after that. Now THAT's impressive! Well done, you!

This eggnog French toast is just as good as the original with a twist. For all you non-eggnog lovers out there, don't worry! This recipe tastes absolutely nothing like eggnog. 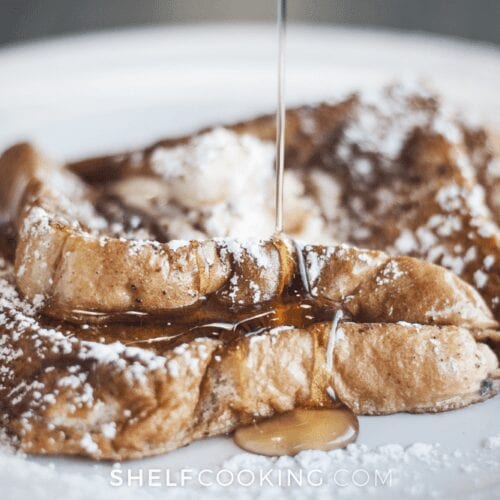 So yummy, right? And who knew French toast could be that dang easy?

We'd love to hear if you taste the eggnog in your eggnog french toast. When you have extra french toast, what do you do with the leftovers? Leave a comment below and share with us!

Need more tips for shelf cooking in your kitchen?

15 Best Ever Instant Pot Soup Recipes To Try This Fall

The Best Slaw Recipe for Tacos, Sandwiches, and More!